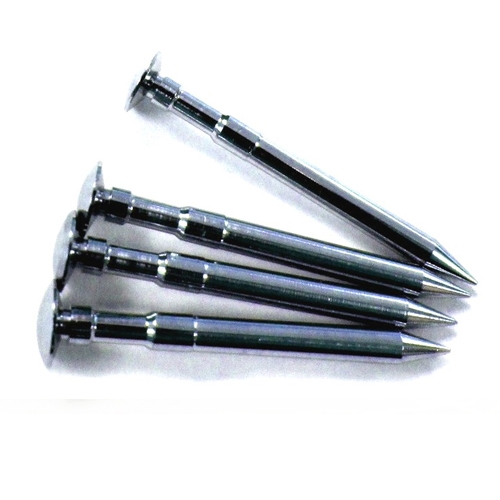 The Pinewood Derby requires that your cub know Pinewood Derby Axles and track if they want to win rounds. The goal with axles is to provide as little friction as possible to the wheels turning. Whether that friction comes from the wheels, axles, or even the center rail, choosing the right axle shape can mitigate the speed slowing issues with a car.

Rail rider style axles are a Derby Dust favorite. These axles are great because they adapt to the track your pack uses. These axles bend, and your cub can adjust the bend each race using some basic tools. This allows more flexibility in your cub’s car.

The trick with rail rider axles is that they allow for Pinewood Derby track variations. Often, the track is assembled and disassembled for each event. This means that the track and lane your cub races on are not likely to be perfectly straight. Rail riders mean the cars do not lose as much speed since they do not bounce the car back and forth on the rail.

Speed axles give better performance in a Pinewood Derby. These axles are straight, which means theoretically, they keep the wheels away from the friction of the center rail and the car body. These Pinewood Derby axles generate the best speed under ideal conditions.

Unfortunately, unless your den track assembler measures every inch of the track to perfection, there will be small variations. Once speed axles hit the center rail, they tend to bounce back and forth. This costs the car speed and possibly the race.

Grooved axles are highly specialized Pinewood Derby design. The axle starts out straight, and then machining occurs for friction reduction. The axles then receive grooves, which further reduce the friction. The slots also serve as a storage place for extra axle lubrication.

Groove axles are designed for speed in your cub’s Pinewood Derby races. However, they require special preparation for those speeds. You may need to help your cub with all the steps.

All axles require preparation before installation in your cub’s Pinewood Derby car. Before race day, you’ll need to ensure the axles are smooth and free of burrs. Typically, a light file works for this.  Followed by a light wet sanding for reduced friction.

The last steps for axles depend on the rules for your local Pinewood Derby. You’ll need to add a minimal amount of grit suitable for holding the allowed lube to the axle. The final step is resealing the axles, so they don’t rust out before your cub’s Pinewood Derby day or if your cub wants to keep the car.

During the race day, your cub should observe the rules around lubrication. There may also need to be spot axle adjustments as the Pinewood Derby races continue, so keep your tools handy while you enjoy your cub’s race day.